Eight Months and a Baby

It's hard to write a blog when you haven't written a blog in four months. I have good reasons. I promise. So let's just start with the big news:

I'm having a baby. In June.

There. I said it. It is still kind of weird for me to say, though I am officially entering the 3rd trimester so this is not new news to me. Still, it's weird. I'm going to show you something. I've posted this nowhere. Nowhere, you here me? But because I'm feeling frisky today and where else to share than with the entire internet, I present this: 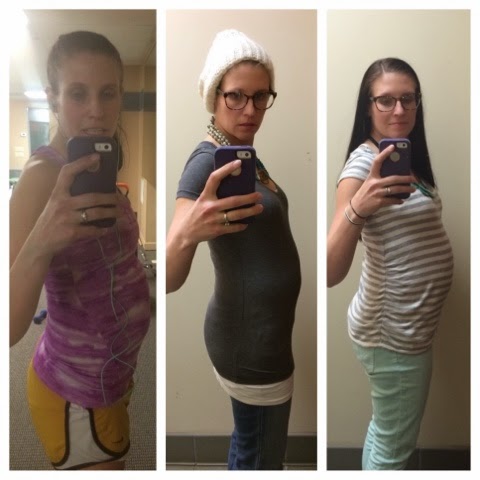 I have to say that it's a super weird question to me but I get it a lot so I am going to go ahead and answer it: yes, we planned this baby. Sure, he's coming faster than we might have thought. But we are so thankful he's making an appearance in our lives. Yes, I said he. What? You think for a second I wouldn't find out? Oh no no no no. I can't do that kind of waiting. My patience is limited in general and I had to find out as soon as I could. So we took IC with us in January to find out that we'll be a two-boy family come June.

I want to address something that I get a lot in person and I think it's important to dismiss this notion. Here's the comment:

"Oh my gosh! This happens ALL THE TIME!"

Well. OK. Let's walk through this together, can we? First, we adopted out of a plan A. This dude? Plan A. Always.

Meaning: yes, we had a very public loss but we were always told we should not have problems conceiving and, in fact, the doctors who told us that were spot on. When it was our time, we had no issues. We didn't adopt because of infertility. We adopted because we wanted to add IC to our family that way. First. As our firstborn. We had always wanted to do that way first and it worked beautifully for us.

But I want to address this because it's bigger than us. I have many, many friends who walk the road of infertility. It's hard. It hurts. And I have listened to their stories and held them and watched their tears fall many, many times. And do you know that saying things like "It always happens like that! You adopt and then BAM! You're pregnant! I think you just needed to relax!" is like for them? It's hurtful. And the reality is that it DOESN'T normally happen that way. And to assume that relaxation is the answer really belittles all the pain that people who struggle to conceive go through.

So yes. We did adopt. And now we are having a baby. But those two things don't have anything to do with one another except for the fact that they are both happening to our crazy family. It's a tender subject for me and people I love so I just wanted to make sure we talked about it together. As an internet community. Because you all have been our people.

In general, this pregnancy is going swimmingly! I wasn't too sick at the beginning. Tired? Yes, but I also had a new son who didn't sleep. Second trimester came and went with lots of energy, great feelings, and the amazing spectacle of watching my body grow. We're now fully into the last three months, preparing mentally to be tired and not sleep ever again. Or at least until 2017. I've been blessed to have a great pregnancy so far. And I'm looking forward to these last few months.

Back to IC and our crazy life!

The question we get most often is, "How is IC doing with all of this?" 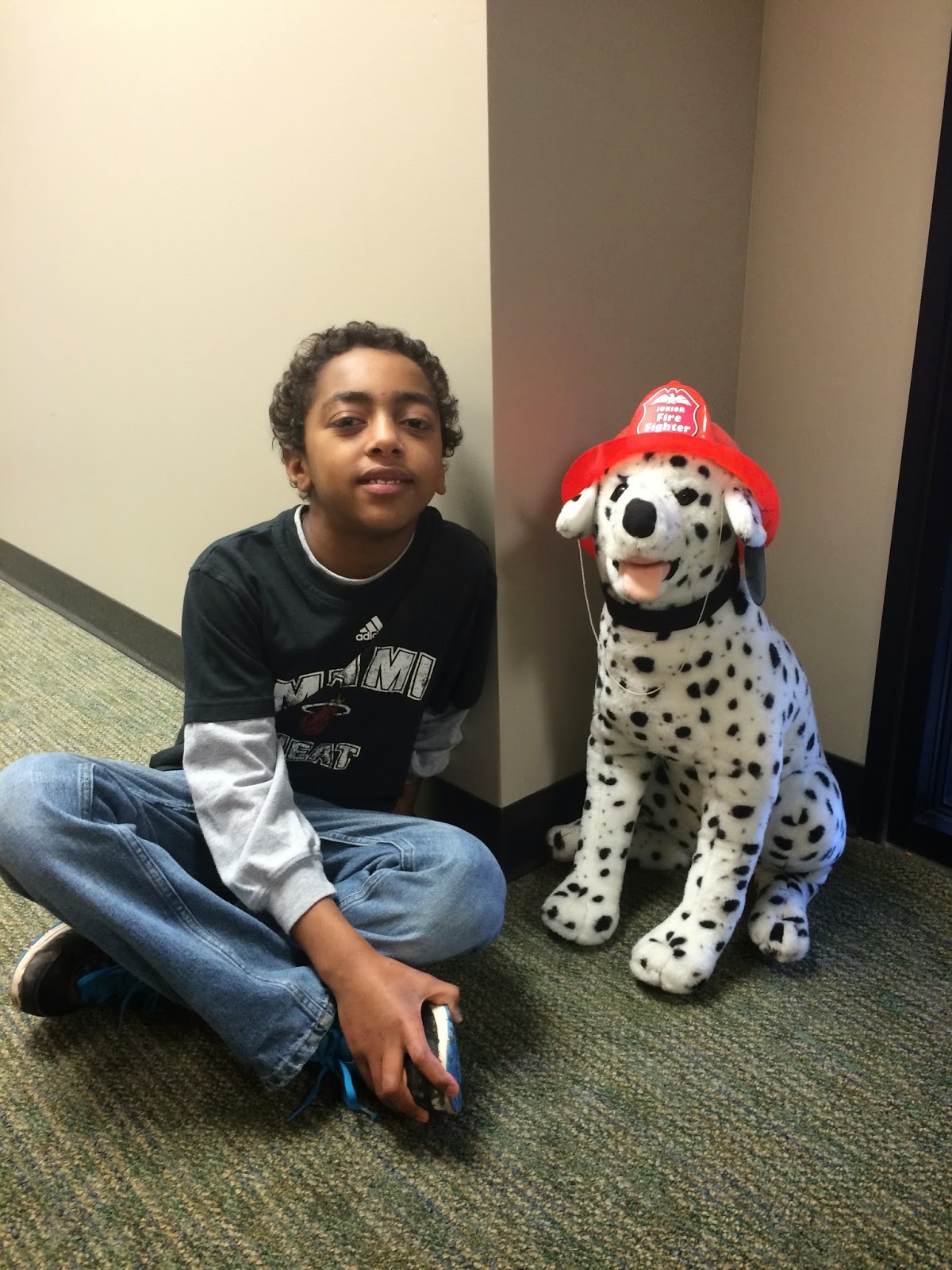 I wish I could tell you it's been really simple for him. That he's been thrilled since we told him in December. That it's been an easy transition for him. But that would be a big ol' lie.

I mean, here's the thing: we are talking about a boy who has had, I don't know, a million changes in eight months. That's right. As of now, he's been a part of our family for eight months. And we've added so much change to his little heart and mind. So of course, one more GIANT change in the form of a baby brother and he's got mixed emotions. He wants to be excited about it. He does. But, well, what does this mean? For his permanency in his family? For our love? For his future? He doesn't know.

We know. We know that nothing will ever, ever change our love for him or his place as the firstborn in our family. But conveying that to him is just really tough. So we are working more each day to help him get excited about brother and remind him that our love for him started LONG before we had a picture in hand and will never, ever, ever fade. And we're doing some tangible things, like letting him pick the crib and the going home outfit and really, anything else. I don't feel like my brain can handle those details most of the time anyway. Like most things in our life, IC's feelings about the pregnancy are a work in progress.

It's been so long since I've given an update that I wanted to give more IC info. He's seen snow:

And he liked it! Mostly. 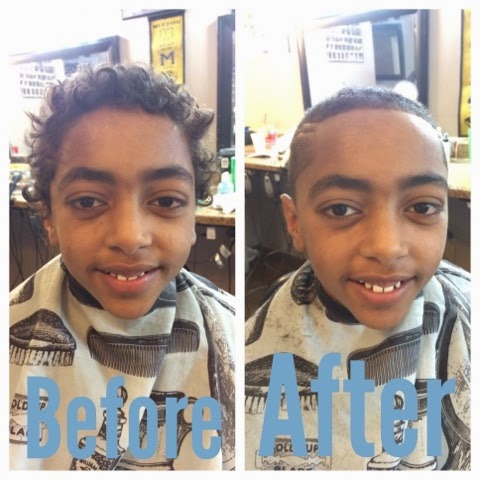 And we're already growing it out again! This boy LOVES his hair. He spends quite a bit of time fixing it and looking at it in the mirror. It's a little bit of a change for a mama who barely fixes her own hair. But his hair is pretty awesome so who can blame him?

We've made some new family traditions, like donuts on Saturday morning: 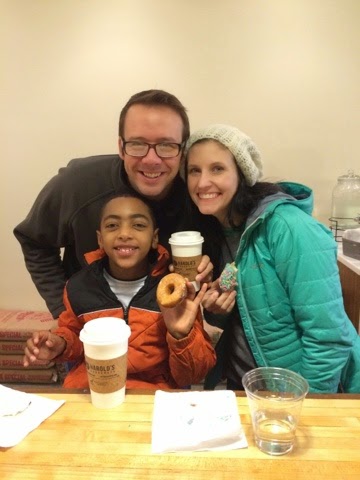 And painting before dinner and board games after: 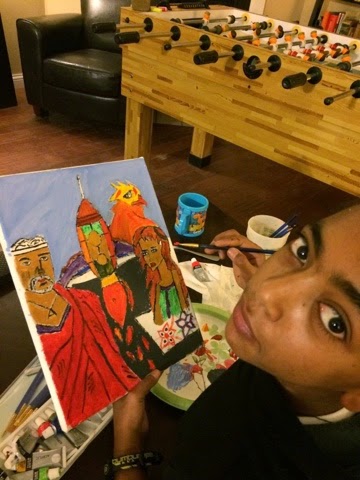 And we've found IC is pretty talented at painting. And soccer. And lots of other things. I'm sure we haven't figured out all his talents yet.

School is going well and he's learning so much! Parent teacher conferences were a joy, as we listened to both his classroom teacher and his English Language teacher share how hard he works, how kind he is, and how well he's doing. We've seen him go from about three English words to writing sentences by himself. It's amazing. And I seriously couldn't be prouder of the growth we've seen in this beautiful little boy.

I mentioned last time that sleep was tough and I am so happy to report we've seen great strides in this area. He's doing so well.

I find myself texting friends my failures. Like all moms, I think I feel like a failure more than I feel like a success story. This stuff is hard. Trusting God to bring healing and hope is hard. But I have dear friends who cheer me on and pray for us and pray with me. Who remind me that my failures remind me of my dependence on God and my successes are really God's to begin with.

We have a long journey ahead of us but we've taken many, many steps already. And we get to take them together.


Thank you for your continued love and support for our family. Our biggest prayer requests right now would be for continued connection for all of us but specifically for the boys, for bedtime to continuously get better, for IC to handle the new addition well, and for getting to school on time (yep! still struggling with that one!).

We're so blessed to have the most amazing boy in our home. And I can't wait to look back in a few more months and see even more growth. We give all thanks to God who is working miracles each day.
Posted by JustJess at 1:12 PM

JustJess
I am a girl who loves glitter, wildly dancing in the grocery store, and reading about Jesus. I have two pups named Rodrigo and Gabriela and the Hubs and I am working on getting my son home, one set of paperwork at a time. 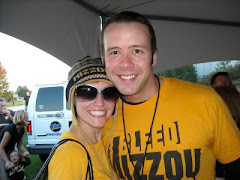